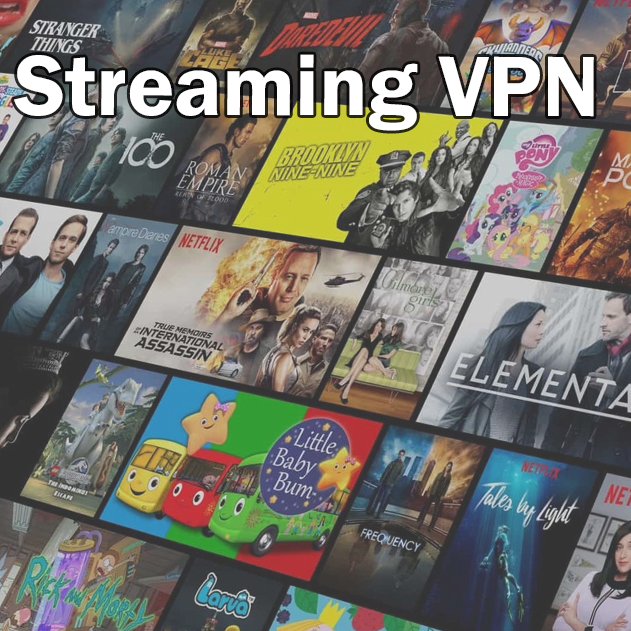 Last Updated on November 10, 2021 by HowToPioneer

Everybody knows that US Netflix is the best Netflix. It’s got the full library of shows, content that you theoretically can’t watch from some other countries.

Whether you’re from the UK or North Korea, you can access Netflix’s vast library right from your own laptop or phone. All it takes is a VPN.

I have made a video about the best streaming VPN

VPNs protect your privacy on the internet and trick ISPs into thinking that you’re browsing from a different country. In this article, we’ll take you through a list of the top 5 best streaming VPNs out there, so you can get off google and get to bingeing.

What Is The Best Streaming VPN?

A close second place is Ivacy, which is another very reliable VPN that we like a lot – particularly the way the VPN interface looks like which is very easy to use. Find a matching server based on the streaming website you want to unblock.

First up we’ve got Surfshark.

Surfshark is a VPN which offers a good deal of extra features in comparison to other VPNs in the market. Its competitive pricing combined with its features and servers make it a very alluring option to any potential users.

Surfshark boasts a network of over 1000 servers in 60+ countries.

On their website, they’ve even got a list of all the countries they support, so you can have a look before committing. However, most of the big ones (USA, UK, Canada, Australia, Europe, Japan) are included.

Surfshark Unblocks ALL major streaming platforms this includes Netflix, Amazon Prime, Hulu, Disney+, BBC Iplayer and many more. They often bring updates out. You won’t get blocked out with this well working VPN. Combine this with a competitive pricing and you get the best streaming VPN.

Another big selling point of Surfshark’s is the wide variety of features it offers.

In today’s cluttered digital landscape, there’s practically not a site on the web you can visit without being bombarded by ads. Surfshark’s VPN service doubles as a powerful adblock, and keeps ads, malware, and phishing attempts far away from your browsing experience. You know, where they should be. I have written a detailed review of Surfshark.

This is a big plus for us. Some of the VPNs on this list only allow you to connect a limited number of devices. Especially if you’re into tech like we are, you might have 7, 8… hell, 50 devices that need connecting.

…maybe you don’t want to use your VPN with every site or app. Surfshark’s whitelister gives you the ability to let some websites bypass the VPN. Which means a more customized user experience.

These are the main things we’d like to touch on for the average user. However, the list of features is as long as it is varied. With Surfshark the main draws are the features and the pricetag.

Forbes Voted For NordVPN for us it is clearly Surfshark!

2. Ivacy – Easy to Use Stream Interface

Next up in our best streaming VPN list is Ivacy. Ivacy offers a very streaming-friendly VPN at a reasonable price.

One of the main things they offer is buffer-free streaming. You may or may not be aware, but ISPs often throttle your internet speed. This leads to lag and overall annoying experiences. Ivacy (and to be fair, most VPNs), allows you to mask your IP address and bypass ISP throttling.

Ivacy’s purpose selection allows you to use your VPN with intention. Whether you’d like to download something, stream shows on Netflix, on unblock geoblocked sites, Ivacy works to optimize your experience based on your usage.

A bit low on servers…

Though Ivacy has servers throughout the world, it only has about 500 of them. The less servers, the more potentially spotty the connection could be. Also, there have been some issues with Netflix working with Ivacy in the past (probably due to the smaller amount of servers).

If you’re in the market for a VPN just to watch US Netflix from another country, there are options on this list that probably will work a bit more consistently than Ivacy. I have done a full review of Ivacy.

Overall, Ivacy has got a user-friendly experience, helps you stream without lag overall, but has had some inconsistency with Netflix in the past.

PureVPN – Unblocks All Platforms As Well

PureVPN takes us a step into the big leagues of best streaming VPNs.

That’s a lot of servers:

PureVPN boasts over 2000 servers in over 140 countries. That’s more than double the amount of any VPN on this list so far. We place an emphasis on servers since servers are what make a VPN faster or slower; more or less dependable; and more or less secure. I have also written a deeper review of PureVPN.

…in a sense. What it really does is turn public wifi secure. Public wifi networks are some of the easiest points of entry for cybercrime. If you’re someone who frequently works with sensitive materials while at Starbucks, definitely consider downloading a VPN.

PureVPN offers all of the basic things that most VPNs offer: increased online security, privacy, and yes, a speed and streaming boost. They don’t have all the features that, say Surfshark has, but they do have a lot of servers and the subscription price plummets if you commit to a five year plan.

In the perpetual arms race of Netflix vs VPNs, PureVPN has had some trouble in the past. Currently, they’re able to bypass Netflix’s VPN ban and have proven that they’re capable of keeping up with Netflix’s rapidly changing attempts to ban VPNs.

All in all, PureVPN offers a solid—if a bit plain—VPN option. They’ve got a ton of servers, but if Netflix is your main reason for buying a VPN know that they’ve had some trouble in the past.

If you watch a lot of YouTube videos, chances are you’ve heard something about NordVPN, as they do a lot of affiliate advertising through YouTube. They’re the market leader, the big dog in the VPN world, and a very good choice for just about anyone.

But here’s the thing:

Their 5000+ servers are spread out over just 59 countries. PureVPN has servers in 140+ countries (albeit less overall). If you’re from practically anywhere in the developed world, this will not be an issue for you. NordVPN is definitely a market leader in the VPN market take a look at my review of NordVPN.

If PureVPN was a big step up in terms of servers, then NordVPN is a gigantic leap.

NordVPN offers all the privacy and security benefits of the other VPNs as well. They have a strict no logs policy and don’t keep any of your data. Their automatic kill switch protects you in the event that your connection to the VPN server stops.

Streaming Netflix is a breeze and fast too.

NordVPN also, quaintly, has an excellent customer service team. In the digital age, it may seem strange for a highly digital company to have great, human-to-human customer service. But hey, it’s just a small part of what makes NordVPN so great!

If NordVPN’s the king, then ExpressVPN would be… well probably also just a king of a different kingdom. This VPN has everything you could reasonably want from a VPN.

ExpressVPN boasts over 3000 servers in over 94 countries. Numbers like 3000 and 5000 are pretty astronomical in the VPN world, and serve as great testimony to the overall quality of the VPN.

ExpressVPN offers Netflix streaming for all the biggest versions of Netflix out there—US, UK, Canada, and so on. Like with NordVPN, the streaming world is your oyster if you decide to go with ExpressVPN. ExpressVPN is the second biggest VPN on the market, I have written a ExpressVPN review as well.

Use it on all your devices:

This is a key leg up that ExpressVPN has over NordVPN. Where NordVPN only allows six devices, you can use ExpressVPN on an unlimited number of devices (but only up to five simultaneously). This makes ExpressVPN a smarter choice for those with many devices.

ExpressVPN and NordVPN are very similar in price, but NordVPN beats out ExpressVPN by a thin margin.

If you’re looking for a VPN solely to watch Netflix, then you’ll be in good hands with either NordVPN or ExpressVPN. If you’ve got a bunch of devices, then maybe ExpressVPN will be the better option for you.

Just collected here most of the questions I found in the comments below the video. Hope the answers are helping you. If you have any more questions please write a comment.

Can I use VPN to watch Netflix in other countries?

Absolutely. Using a VPN is the easiest way to access Netflix from other countries, when your own country’s Netflix doesn’t have the show you want to watch.

Which VPN works with Netflix in 2020?

Every VPN on this list works well with Netflix in 2020. However, you strongest choices will be NordVPN and ExpressVPN.

Can Netflix ban you for using a VPN?

They cannot ban you, or your account. If they detect that you’re using a VPN, you may get an error message that doesn’t let you watch you shows. However, with the VPNs on this list you should be safe from Netflix detecting a VPN.

What VPN works with Amazon Prime?

All of the VPNs on this list should work great with Amazon Prime. However, the three we’d recommend most are NordVPN, ExpressVPN, and Surfshark.

Can I use my Prime membership in another country?

You will be able to access Prime Video using a VPN, as the VPN will “trick” Prime into thinking that you’re still in your home country. If you’re from the US traveling in Europe, for instance, you will be able to connect to your US Prime account through the use of a VPN.